It was a terrific and memorable Oscar ceremony. For the first time in years, almost everything that happened was acceptable. There weren't any real downright shockers, but the surprises were cool and interesting. This is as good as it gets for Oscar telecasts. I am not as good at this as Zach, but check out my thoughts below: 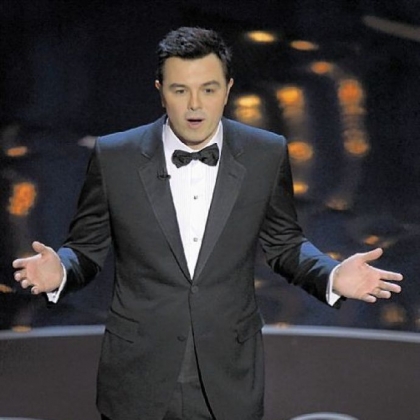 Reviews of the ceremony, whether justifiably or not, will always start and end with the host. Seth MacFarlane was hilarious. He got the humor of the Oscars to be a bit more lively and hip, but he wasn't disrespectful. He pulled in the younger demographic with his Family Guy-type humor, but it was tame enough to stay classy enough for the event. He took a few cheap shots at easy targets like Mel Gibson and Chris Brown, but they worked. From his opening line about making Tommy Lee Jones laugh to the final number with Kristin Chenowith, MacFarlane got it right.

His opening monologue with William Shatner was funny throughout, but it took forever. It was almost like a sitcom episode. His skits about The Flying Nun and Flight were ok, but they were odd and really made the thing go a bit overboard. I loved his subtle Good Will Hunting reference (“It's not your fault.”) after telling Ben Affleck that the Academy knows they screwed up. Later, however, he apparently pissed off Affleck with something he said, either the Kardashian bit or the “getting inside Lincoln's head” bit, but either way, he was not pleased and had a very awkward moment telling him off, almost in a Sean Penn-highly-uncomfortable type of way. Almost every joke he gave worked, and the ones that didn't, he acted like a pro and deflected the negative energy. He was the best host in years.


Oscar Stats
1. Daniel Day-Lewis became the first 3-time Best Actor winner. He is only the 6th ever to win 3 acting Oscars of any kind. All 3 came within an 11 film span.
2. Ang Lee became the third Director ever and the first since 1956 to win 2 Best Director awards without having either win Best Picture. He previously won for Brokeback Mountain (and should have won for Crouching Tiger, Hidden Dragon).
3. Christoph Waltz becomes only the third actor in the last 30 years to win Oscars in his first 2 tries. The previous ones were Sally Field in 1979/1984 and Kevin Spacey in 1995/1999.
4. George Clooney became the second person ever to have nominations in 6 different categories. Walt Disney was the other.
5. Life of Pi won Best Visual Effects, extending the streak of Best Picture nominees in the category. The last time a Best Picture nominee lost to a non-BP nominee was 1970.
6. There was a tie in the Sound Editing category, the 6th in Academy history and the first since Live Action short split in 1995.
7. Jennifer Lawrence (22) became the second youngest Best Actress winner ever, only being topped by Marlee Matlin (21).
8. Argo became the first Best Picture winner since Driving Miss Daisy in 1989 to not be nominated for Best Director.
9. Argo became the 2nd film in the last 36 years to win Best Picture with only 3 wins. Crash was the other, also presented by Jack Nicholson.
10. Silver Linings Playbook was the first film in 8 years to be nominated for Picture, Director, Actor, Actress, and Screenplay. Million Dollar Baby was the last to do so. Oscar Speeches
There is always a lot of talk about the Oscar speeches. Who gave the best, most emotional, most genuine, most boring, longest, etc. Here are my rankings of my top 5 of the ceremony:

5. Ben Affleck, Grant Heslov, George Clooney – Best Picture – Argo. Affleck continued his trend of speaking almost incomprehensibly fast, appearing nervous and just astonished that he has come so far since he was last invited 15 years ago.
4. Claudio Miranda – Best Cinematography – Life of Pi. You could tell that Miranda was just so touched and overjoyed that his work he loved so much was singled out, almost to the point of not being able to express it in words.
3. Daniel Day-Lewis – Best Actor – Lincoln. Day-Lewis was funny, charming, and his bit about his wife living with all those different crazy men was beautifully delivered.
2. Christoph Waltz – Best Supporting Actor – Django Unchained. Waltz was so overwhelmed with receiving the award and basically gave all of the love to Tarantino. As Zach pointed out, he really is Tarantino's Dianne Wiest.
1. Chris Terrio – Best Adapted Screenplay – Argo. Terio's speech was frenetic, brilliantly-delivered, and emotional, just like his film. He was so moved and gave Affleck the props for helping him achieve the same heights that Affleck did with his first script.

One of the weakest speeches probably belonged to Tarantino, which you could see by Jamie Foxx's reactions that he almost sounded like a complete dick during it until he brought it back. He cut off the band to finish up his wayward speech. He is awesome anyway. Brave's winners were also a bit off during its award. Not all that many of them were bad, though. There are usually a handful that are horrible or just way too long. They did well this year.

Winners and Losers
Ok, so here is my “Sportsnation”-style winners and losers rundown. Check it out:

Winner: Quentin Tarantino. He has his first award in 18 years, officially showing that the Academy will recognize him no matter how indulgent the material.

Loser: Stage ushers. The biggest moment of the night when the star Best Actress winner Jennifer Lawrence goes up to accept her trophy, there is no one to help her up the stage? She fell flat on her face, if you didn't know already. Good thing she is so quick n her feet and a goofball or else that could have been a devastating moment.
Loser: Chasing Ice and “Pi's Lullaby”. I am not sure why the other three songs got a live performance and these didn't. A little distasteful. That would have been a cool excuse to invite Scarlett Johansson to the ceremony as well, if appearing with the rest of The Avengers cast wasn't enough of a reason.
Winner: Ben Affleck. Not being nominated for Best Director and everyone knowing what a joke that is, he is on a path to become the next in the line of great directors without an Oscar and getting that important “overdue” label. His Best Picture speech was great and essentially what he would have said for Best Director.
Winner: Jaws theme. Great choice by the Academy to not just have the normal orchestra music to cut the long speeches off.
Winner: Singers who were popular in the '60s. Shirley Bassey (“Goldfinger”) and Barbara Streisand (“The Way We Were”) both got standing ovations for their performances of their songs from 40-50 years ago.
Loser: Harvey Weinstein. He wasn't able to buy Best Picture this time, and his two main contenders (Django Unchained, Silver Linings Playbook) only won a total of 3 awards.
Loser: Joaquin Phoenix's Oscar clip. Despite being perhaps the best scene of the year, Phoenix appears in the audience shaking his head, showing again his displeasure for the whole process.
Winner: Ties. The first tie in 18 years gave a cool and rare twist to the ceremony.
Winner: Jack Nicholson's house. Ted and Marky Mark revealed the massive Hollywood orgy's secret location during their presenting of the Sound categories.


Winner: Neighbors. Tarantino accepted his reward by letting everyone know that his presenter Charlize Theron was his neighbor, and how cool that is that he gets it from her. Oh, and thank you Mr. Hoffman.
Winner: Possibility of Day-Lewis and Streep as costars. DDL's speech was awesome with his bit about Streep. They clearly have a lot of mutual respect. They need to join forces at some point. Loser: The audience. They were totally awkward when they clapped during Kidman's presentation of 3 of the Best Picture nominees and not clapping during DDL's announcing of Kushner, Spielberg, and Honest Abe.
Winner: Chicago, apparently. There was a long love-fest with the Oscar darling from 10 years ago, including their whole principal cast giving out the music awards.
Losing: Tipping your hand. The last two major Oscar musical Best Supporting Actress winners performed, followed by Hathaway performing. Then they gave her the Oscar. “Skyfall” is performed alone just before it receives the Best Original Song Oscar.
Winner: Star Trek. The appearance of William Shatner and some other talk of the franchise throughout the ceremony helps this year's release into the Star Trek canon.
Winner: Kilts. Screw typical American formal wear, I am wearing my kilt when I am accepting my Oscar!
Loser: The Avengers. The blockbuster smash lost Best Visual Effects and their presenting was stupid if it was staged and just distasteful if it wasn't.
Winner: Appearing to be stoned. Renee Zellweger and Kristen Stewart. Go watch it back if you don't believe me.
Winner: Best Picture format. The new format finally worked. If there had been the 5 BP nominees, then Argo would probably not have gotten nominated. They were able to get at least this category right, even though they screwed up the other big one.
Loser: Foreign Films' chances of winning big. Amour appeared to be more Diving Bell than Talk to Her at this ceremony. Note: If it is nominated for Foreign Language Film, it will not contend in the major categories anymore.
Winner: John Lasseter. Pixar takes Animated Feature in an upset, and the Paperman director thanks him in his speech.
Winner: Silent movies (again). Paperman taking Animated short proves that the Academy is still longing to live in the past.
Loser: Beasts of the Southern Wild. It was the only one of the 9 Best Picture nominee to get shut out.
Winner: CGI. Cinematography and Visual Effects have gone to the same major CGI film each of the last 4 years.
Loser: The novelty of seeing Kate Winslet's boobs. MacFarlane's ode to toplessness on screen pointed out how often our favorite nude star shows us her...assets.

Winner and Loser: Michelle Obama. Announcing Best Picture was a cool twist. However, whatever she was saying was so damn boring and longwinded that no one remembers it.
Winner: The Coppolas. Roman Coppola was another Coppola nominated, which was pointed out by MacFarlane in a funny bit about their family dynamics.
Winner: The Oscars. The show was a much better production than in past years. They may have found their host of the future, one who is even a nominee now. They didn't let the beginning drag only to rush the most important awards, at least not as much as usual. It was a great show, one of the best I have seen.

Thoughts on the ceremony? The winners? The snubs? MacFarlane? How did you do on the Oscar Challenge? Let me know!
Posted by Todd Plucknett at 12:17 PM No comments: