Looking back 10 years ago, 2001 was a year that will be remembered in our nation's history for the 9/11 attacks. However, the historical tragedy often overshadows the incredible year in film that 2001 turned out to be. There were so many great films that are celebrating their 10 year anniversary this year, and some of them may get commemorated on this site later, however I want to start out with the film that was my favorite from that year: A Beautiful Mind.

Ron Howard directed Best Picture winner that explored the real life of John Nash, one of the great minds of our time that was haunted by his battle with schizophrenia. Russell Crowe portrays Nash in what should have been an Oscar-winning role if he hadn't have won one the year before for the inferior Gladiator. Jennifer Connelly won the Oscar for playing Nash's wife that stands by his side through thick and thin. Paul Bettany and Ed Harris portray two of Nash's hallucinations; Bettany as his college roommate and best friend, Harris as a government official hiring Nash to investigate conspiracy theories. It was these investigations that finally forced Nash to question what was real. You get to follow Nash from college to old age as he excels, loses his grip on reality, struggles with finding it again, and eventually wins a Nobel Prize after finding peace and balance. It has become a standard in real life biopics. 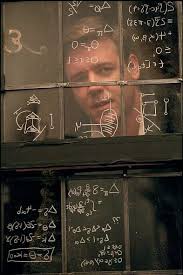 Best Scene: There are few scenes in film that bring tears to my eyes, no matter how many times I have seen them. The closing scene of A Beautiful Mind is one of them. You go through this whole incredible ordeal with John Nash as he puts it "through the physical, the metaphysical, the delusional, and back." Then at the end you see Nash finally get the recognition for his original idea that he had always sought by winning the Nobel Prize. He gets up to give his acceptance speech, and points to his wife to say the only reason he was there was because of her. Through everything Nash experienced, his wife remained the rock that kept him stable. He finishes his speech by wiping his face with the handkerchief she gave him on their first date. I really don't know why, but it brings a tear to my eye every time.

Best Line: Although this is a complex human drama, there are definitely some lighter moments. Watching Nash try and pick up a girl at a bar by asking to skip the boring conversation and go straight to the "exchanging of fluids" would be one of those. Or when Bettany's Charles explains why dying of thirst in a desert would feel like a hangover. Or when Nash tells a friend he sat on one of his imaginary friends to which Nash follows up "What's the point of being crazy if you can't have a little fun?" However, my favorite quote is one of the only stand-alone one-liners in the whole movie. In the opening scene, as the new Princeton students are meeting each other, John Nash looks intently at one of his fellow students and simply states, "There must be a mathematical equation for how bad your tie is." I must say this line comes to mind every time a see a tie worthy of a mathematical equation.

Most Iconic Moment: Before Nash went crazy thinking he was doing top secret CIA code breaking, he actually did some top secret CIA code breaking which certainly fed his hallucination. The first scene we get to see Nash in this capacity he walks into a room with code printed all over the walls that he is asked to decode. As he stares at the code, you get a glimpse into the beautiful mind of John Nash as the code illuminates and surrounds him as it all gets put together in his mind. It is one of the only special effects in the movie, and it is very tastefully done. It is also the shot you see most often to represent this movie. An honorable mention would be Nash outlining shapes in the stars with his future wife by his side.

The Time Tester: With A Beautiful Mind just being 10 years old, there has not been too much time that has passed to see if it has stood the test of time. However, the time tester for me in this film is the high level of intelligence it brings to a common story. There are many stories out there that follow this model of "flawed protagonist that must overcome adversity to better himself or herself." However, few films are able to portray this story arc with the intelligence and thought provoking detail that A Beautiful Mind brings. In many ways, to fully understand the film and all its nuances, you have to be more than just a casual moviegoer. It is a thinking man's movie with a feel good plot line. Few films have been able to combine the two quite like A Beautiful Mind.

The Lasting Impact: I believe this film has had great lasting impact on film over the last 10 years. First, from what I have seen (and there are a few I have not seen) this is still the greatest performance of Russell Crowe's career to date. It was his third Oscar nomination in a row, and if Gladiator made him a household name, A Beautiful Mind solidified him as a go-to dramatic actor over the last decade. It also helped put Ron Howard in a similar career position. Although Howard had been around for awhile, this is the film that had earned him his Oscar. This film, along with Apollo 13, also made Ron Howard the go-to director for 20th Century historical dramas. Add to that list 2008's Frost/Nixon and it is easy to see that a trend of excellence has started for Howard in that genre. It also launched the careers of Jennifer Connelly and Paul Bettany into superstar status, as well as launched their romance that culminated in a 2003 wedding. The fact that they are still married might be the most lasting impact of them all.

Looking back on 2001 a decade later, I see one of the greatest years of film in my lifetime with this being one of the crown jewels of the year and the decade. It certainly is one of my favorites. I love a well-made feel good movie that I can relate to. I also love a film that makes me think. This film fulfills all these and will be one I revisit for a long time to come.

Posted by Terry Plucknett at 8:40 PM