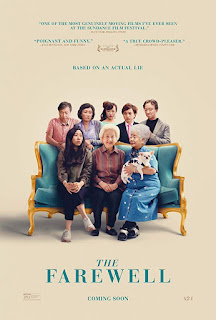 Every summer, amidst all the big budget blockbusters, there is always a couple small independent movies that emerge as surprises.  They may not end up making a whole lot of money at the box office, but they are remembered at the end of the year on awards lists and critic top tens.  The Farewell is bound to be one of those films in 2019.

Written and directed by Lulu Wang in only her second feature film, she tells a deeply personal story from her own life.  The story is told from the point of view of Billi, played by Awkwafina, as she discovers that beloved grandmother, Nai Nai (Shuzhen Zhou), has cancer and only a few months to live.  In Chinese culture, the family often lies to the dying family member about their prognosis to avoid depression and help extend their life.  Billi was born in China, but moved to New York City when she was six which makes this tradition sound insane and dishonest.  However, she goes along with it as the whole family travels back to China to say goodbye to Nai Nai.  To mask the reason for their journey Billi's cousin gets "married" to his girlfriend of three months.  With this premise, the whole family tries to hold it together to not give anything away and make this the positive experience for Nai Nai it is intended to be. 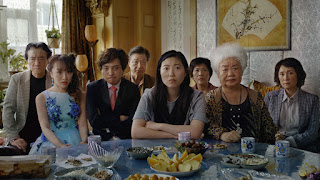 It is obvious how personal this story is to Lulu Wang as it is told with such tenderness and heart.  Every scene feels real and intimate, probably because Wang has actually lived every scene in this movie.  Awkwafina, who is emerging as one of the freshest faces in comedy, shows her true acting chops in this subtle and subdued performance.  However, the scene-stealer is Shuzhen Zhou as Nai Nai.  In her first film role, she gives the most memorable performance of the film as the clueless, brash, endearing matriarch of the family.

The famous Jim Valvano ESPY's speech says there are three things you should do every day: laugh, cry, and think.  It is rare that a film brings about all three of these.  The Farewell is one of those rare films.  It is heartwarming and heartbreaking.  It is extremely funny and extremely tragic.  It is, in so many ways, life.  I kept waiting for that inevitable moment that comes up in all films like this that is the emotional center of the story.  Where is Awkwafina's Oscar moment?  At first I was slightly disappointed when it never came until I realized that it is too grounded in reality for it to occur.  In the place of an emotional monologue is a look, a hug, a nod, and all the other subtle ways we actually connect with each other.  The more I reflect on it, the more I love it.

There had been a lot of buzz surrounding this film since its debut at Sundance.  Going into this movie, I only hoped it lived up to the hype.  The funny thing is it lived up to the hype despite being nothing like what I expected it to be.  This will be a film remembered at the end of the year as one of the most surprising and heartfelt films of the year.  I know that's how I will remember it.  If it is playing near you, go see it while you can.

Posted by Terry Plucknett at 9:43 PM No comments: