It may seem a bit morbid to rank serial killers. Many films even make them out to be heroes or are sympathetic toward them. Since there are so many great performances by the actors portraying serial killers, I thought it would be interesting to make a list of the most memorable ones. I decided to exclude television characters (or Dexter, Trinity, etc. would dominate the list), characters who kill for money or any other logical reason (contract killers, bank robbers, etc.), and people on a killing spree (Natural Born Killers, Badlands, etc.). So, we are basically talking about compulsive murderers and psychopaths. Sorry if there are any spoilers, but basically all of these films are widely-known. So, in honor of the 5th anniversary of arguably the best March release of the last 10 years (David Fincher’s magnificent Zodiac), here is my list:

This is the perfect example of a character creating a frightening reputation before you even see him, perhaps taking its place with Bill in Kill Bill as the best in that regard. Lynch is chilling in the film, and he really doesn’t do anything to be that way. You see his crime scenes and hear all about him and the games he plays with the law, but you never see him in action. Obviously, we don’t know who the killer is for sure, but the book and film definitely make it clear who they believe is guilty. The final scene is one of the most intense stare-downs ever I have ever seen on screen.

9. Buffalo Bill (Ted Levine; The Silence of the Lambs)

What Ted Levine does as Buffalo Bill has never ceased to amaze me. Buffalo

Bill gets under our skin and just creeps us out. “It rubs the lotion on its skin!” The guy is a freak, and he has one of the most disturbing rituals of any serial killer on this list. This supporting character will haunt you long after the movie is over, but obviously not as much as one of the other characters. I wonder who that could be…

The only somewhat offbeat inclusion on this list is one of Tarantino’s most ridiculous characters. Now, serial killer is not exactly the first term that I would use to describe Stuntman Mike, but he definitely is one, seeing how each one of his kills are separate and ritualized and that he is a social outcast with absolutely no remorse for his actions. What Russell is able to do with this character might be his most impressive acting, and it is this character and the way he meets his match that is the audience’s lasting impression from this glorious send-up to the drive-in exploitation films of the ‘70s.

lms. We see Henry and his buddy Otis murder at random, sometimes just for a lack of anything better to do. They tape the murders and watch the videos as entertainment. It portrays Henry as a normal guy, and then shows in stark brutality his raging murderous side. The movie does not exalt or condemn Henry, it just observes him. The whole thing seems frighteningly real, which makes the entire film and characterization of Henry even more disturbing. You may not like this movie, but you certainly will not be able to shake it.

The reason why this character is so memorable is because of the complete transformation that Theron made. For me, it is perhaps the best performance of the 2000s, and it is one of my favorite films of the decade as well. She may have been on somewhat of a crime spree after killing her first victim in self defense, but she really became delusional and suckered guys into thinking that she was just any ordinary prostitute, when in reality she planned on killing them for their cash so she could run away with her sheltered lover Selby. The character is simply impossible to forget, especially with how the film ends and how much the audience really begins to care about Wuornos and Selby.

This is one of the most frightening characters I have ever seen on screen. On the surface,

Bateman is just another Wall Street yuppie. He is completely self-absorbed and a total dick to everyone. He takes amazing care of himself, and other than his occasional inner monologue, you really have no idea what he is thinking. The way he kills his victims is disturbing, mainly because he is so smart and careful about it. Bateman could be anyone, and I do not think I am alone when I say that the scene where he chases a runaway down the hallway naked with a chainsaw is one of the most haunting images of any movie in the last 15 years.

This film was so far ahead of its time. There are several images of this film that are permanently engrained in my mind. The movie does not want sympathy, but it wants the audience to understand what goes on in the mind of someone that any normal person would call a monster: a child murderer. Beckert seems completely innocent and pure evil at the same time. The audience can decide exactly what to think of Beckert, but either way you turn, you will not be able to forget him. This is one of the best movies ever made, and for anyone who has not come across it, watch this movie and get immersed in the atmosphere of the best film-noir has to offer.

There is nothing like this movie anywhere. Norman Bates is one of the mo 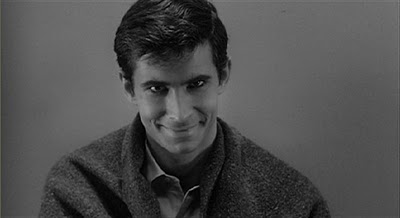 st recognizable and creepy characters to ever grace the screen. It is how he acts that makes the character among the best of all time. He is completely dominated by his mother, and to avoid spoiling anything, I will not go into any further detail. The looks he has on his face and the total nonchalant image he puts on makes you think that you could run into this character anywhere in life. That is what makes him so disturbing.

This is another case of a character developing a frightening reputation before ever being on screen. He murders people to represent the seven deadly sins, but he is so brilliant that he is able to make the murders increasingly personal for the two detectives who think that they are hot on his tail. When Spacey appears on screen as John Doe, it is one of the five most memorable entrances by any character in film history (another power ranking idea?). The ensuing scenes are crafted with so much precision, and the ending is one of the most effective that I have ever seen. John Doe is a horrifying character, and in the end, the audience understands the point that he is making, and we are all left breathless.

Now, I considered deeming him ineligible because it is so predictable that he would be the top, but I just couldn’t do it. Hannibal is one of the all time best characters. He is a cannibal, but he seems like a normal person. As is the case with several others on this list, he is a borderline genius. He is one of the most quotable characters ever. He can simply sit in his cell staring at Agent Starling and send shivers down the spine of the audience. It is popular to think that only The Silence of the Lambs is worth seeing, but I am not in that camp. The other two films are equally chilling, even if they aren’t as well-crafted. Hannibal has become the most iconic villain in American film history, and he is the obvious choice for the most memorable movie serial killer.

Posted by Todd Plucknett at 8:23 PM