This list could be filled with almost any movie mentioned in Seinfeld or 30 Rock, but my scope of knowledge of those shows is not the greatest (hence why only two are mentioned). Other easy qualifiers are the Grindhouse films and Tropic Thunder films, even though most of the former are planned for actual production (omitted those ones). I tried to diversify this list a bit, but it basically ended up just being a bunch of comedies. Nothing wrong with that, though. I will also give my best shot at assigning the film a writing and directing team. Check it out…

10. ASSES OF FIRE (South Park: Bigger, Longer & Uncut)
What we know about the plot: Stupid comedy about two moronic, profane Canadian friends who fart, sing, and insult their way to huge laughs
Writers/Directors: Bobby Farrelly, Peter Farrelly
Why? I am not sure how much more popular this would be than the typical Adam Sandler movie or something, but when the Farrelly brothers are making gross-out R-rated comedies, few filmmakers are more effective. The weird thing is that it is technically live action, so that would definitely make it a bit different.

9. GOOD WILL HUNTING 2: HUNTING SEASON (Jay and Silent Bob Strike Back)
What we know about the plot: A comedy regurgitation of the masterpiece. How do you like them apples? Applesauce, bitch!
Writer: Matt Damon (story), Ben Affleck (story), Seth MacFarlane (screenplay)
Director: Seth MacFarlane
Why? This would probably be awful, unless it really embraces its ridiculousness. In the movie, it is made to be an actual sequel with the stars just looking for a payday, but if someone like MacFarlane got his hands on it, it could be hilarious. Granted, the story is not exactly as iconic as Star Wars, but if I could somehow see Will and Chuckie in a movie again, I would be there in a minute.

8. CHICKS WHO LOVE GUNS (Jackie Brown)
What we know about the plot: More of an informational video than a real movie, but it is all about chicks in bikinis shooting and discussing their assault rifles
Writer: Quentin Tarantino (story), Edgar Wright (story), Robert Rodriguez (story), Eli Roth (story/screenplay)
Director: Eli Roth
Why? Honestly, I am not even sure what this actually is, but if we get the Tarantino brain trust thinking up a story, then this would be amazing. Eli Roth seems to be the one of the four that is least concerned with what people think of his work. He would take the jump and make this into something insane.

7. SACK LUNCH(Seinfeld)
What we know about the plot: A light escapist comedy with a poster featuring a family in a brown paper bag. Details about how they got there and whether the family got shrunk or it is just a giant bag is not disclosed.
Writer: Paul Rudd (story/screenplay), David Wain (story)
Director: David Wain
Why? What makes the thing so great is that Elaine never really thinks about how the bag may be figurative. I assume that it is a real bag, but still. It seems like a light, funny Paul Rudd-esque story. I assume that he and Wain would make it more than just Honey, I Shrunk the Kids or something of that nature.

6. HOME FOR PURIM (For Your Consideration)
What we know about the plot: A Jewish family in 1940s, complete with a patriarch, dying matriarch, lesbian daughter and girlfriend, and son returning from war, gathering to celebrate the Jewish holiday, Purim
Writer: Lawrence Kasdan
Director: Mike Nichols 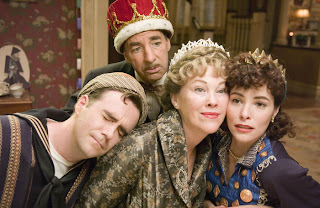 Why? All the while watching FYC, I always thought this looked like a very watchable movie. It seems like a Kasdan story (there is no way that he wouldn’t direct), but Nichols would make this into a brilliant talky movie in a way that only he can. If they are involved, then maybe it won’t just be one anonymous blogger talking about its Oscar buzz…

5. CHUBBY RAIN (Bowfinger)
What we know about the plot: A campy sci-fi alien action movie culminating with the awesome kill scene and line “Gotcha suckers!”
Writer/Director: John Carpenter
Why? Carpenter seemed to be the go-to guy for schlocky horror movies, and this one looks no different. I don’t know how Carpenter can make the cliché and ridiculous be interesting and groundbreaking, but he does. This screenplay would need a rewrite, and it could well be Carpenter’s ticket back to the Hollywood eye.

4. ANGELS WITH FILTHY SOULS (Home Alone)
What we know about the plot: At some point mobster Johnny guns down fellow mobster Snakes, using his token line “keep the change, you filthy animal”
Writer/Director: Matthew Weiner
Why? It has been forever since we have had a real hardcore gangster movie. Who better than Weiner to make a send-up to the Cagney-era gangster flicks? This would be among the coolest things ever. Oh, and don’t forget about the sequel “Filthier Souls” from Home Alone 2!

3. THE 3 (Adaptation)
What we know about the plot: It is a dark, cliché psychological thriller about a serial killer
Writer: Donald Kaufman (screenplay/story), Charlie Kaufman (story)
Director: Donald Kaufman
Why? As Terry pointed out to me, Donald dies, so he can’t direct it. However, that was a movie, not real life. But Donald is not real to begin with, and his Oscar nom was not labeled as posthumous. Screw it, he is directing the movie because we all know that Charlie was not all that into it. The movie was kind of already made as Identity, but “The 3” promises to be so much more awesome.

2. WEREWOLF WOMEN OF THE SS (Grindhouse)
What we know about the plot: Hitler’s diabolical plans to create a race of superwomen, with Nicolas Cage as Fu Manchu!
Writer/Director: Rob Zombie
Why? This is the only one of those mock trailers that has no plans or shot of ever being made, yet it was the coolest one…well other than Machete. I laughed so hard during the trailer, and yet Zombie has the kind of horror skill and comedic timing that this could turn into a modern horror masterpiece. I need this movie!

1. COMING HOME IN A BODYBAG (True Romance)
What we know about the plot: a Vietnam movie and apparently the only movie to win the Oscar with balls since The Deer Hunter
Writer/Director: Quentin Tarantino

Why? So many directors have taken on a Vietnam movie, yet Tarantino seems to be the one custom built to make one. They talk this movie up as being the shit, and when you have a Tarantino script mentioning how awesome Deer Hunter is, you know it has my attention. The title is perfect. If Tarantino puts his mind to it, then I think we could be looking at an all-time war classic. After first watching True Romance, I wanted so badly for the movie to be real. And yet with the million movies that QT promises to make, this has never been mentioned. Sigh…

That was so much fun to write. Thoughts? Omissions? Your list?
Posted by Todd Plucknett at 12:04 PM