With another Brad Pitt-starring blockbuster getting released this weekend (Andrew Dominik’s Killing Them Softly), I decided to do a tour back through the career of the 3-time Oscar-nominated actor. He has developed a very diverse filmography, particularly lately when he has seemingly worked with a new major director each and every outing. He started out as essentially a pretty boy, but he seamlessly disappeared into a few roles early on and eventually became one of the most bankable and reliable actors in the business. Here’s to his work in Killing Them Softly being worthy of adding to this list!

Note: I have seen the majority of his acclaimed work, but I am lacking a few of his lesser mid-90s ventures (Seven Years in Tibet, The Devil’s Own, The Favor, etc.)

10. Inglourious Basterds (character: Lt. Aldo Raine; 2009)
This may very well be Pitt’s funniest performance. He is a menacing character, but his lines are hilariously delivered over-the-top and his attempt at Italian is just amazing. He had just as much to do with the success of the film as Christoph Waltz did. His monologue to his Nazi-scalping Basterds is one of the best of the decade. He doesn’t really disappear into the character, but that is part of its charm. He is one of the many things about the movie that leave a lasting impression. 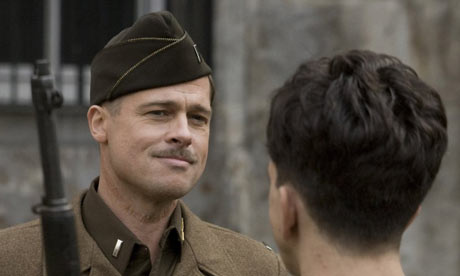 9. Legends of the Fall (character: Tristan Ludlow; 1994)
Even though the film may be a bit soapy and melodramatic, Pitt’s lead performance is really what thrust him into movie-stardom. He lingers around the movie in a very James Dean in East of Eden-kind of way. He is emotional and heroic. The movie hinges on his character and on Pitt’s ability to make the audience care about him. This Golden Globe-nominated performance was the one that let everyone know that he had arrived and that he was not going anywhere for a long time.

8. Kalifornia (character: Early Grace; 1993)
This is another case of a mediocre film that is carried by Pitt’s performance and charisma. Here, we see Pitt completely unhinged, shedding any pretty boy Robert Redford-type image that may have been put on him to that point. However, he also makes the trailer-trash serial killer into someone curiously likable. Only he could have turned this typical psychodrama into something really interesting and authentic. He doesn’t often play the villain, but here he absolutely kills it. 7. Babel (character: Richard Jones; 2006)
Pitt’s performance in Babel is absolutely devastating. To this point, I hadn’t really thought that he had something like this in him, or at least he hadn’t really made an attempt to take on a character that would really push the boundaries of what he could do emotionally. The phone call scenes are deeply affecting, focusing on his frightened and heartbroken face, one of the only times during his career where Pitt truly bared his soul and made us really feel something. 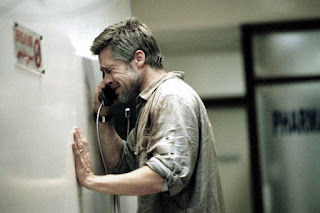 6. Moneyball (character: Billy Beane; 2011)
In one of Pitt’s most impressive feats, he took a normal guy in a seemingly mundane situation and turned it into a heroic American story about something much deeper. Pitt nails every line he is given and plays off his costars (most notably the equally-brilliant Jonah Hill) and makes us actually care about the Oakland A’s. So often, subtlety is overlooked when talking about elite performances, but Pitt’s work here was actually singled-out and should have brought him Oscar gold. His scenes where he is wheeling and dealing with other GM, as well as the scenes carried by his facial expressions (sitting alone in an empty stadium listening to the game in short segments on the radio), show that this is one of Pitt’s most complete performances and one that may be looked back on as a defining role in his soon-to-be legendary career.

5. A River Runs Through It (character: Paul Maclean; 1992)
This is one of those roles that may have seemed like an easy role on paper, but when it is given to a certain actor, it becomes a role for the ages. Pitt’s smile and appeal make his performance one that burns in the memory of the viewer. Those scenes such as “I’ll never leave Montana…” just break your heart and help make the film one of the most emotional of that era. This is perhaps a personal and nostalgic choice to be on this list, but I have always been blown away by Pitt’s work here, the best performance in a rather strong ensemble.

4. Fight Club (character: Tyler Durden; 1999)
In a role that could arguably be ranked #1 on a list of most iconic movie characters of the last 20 years, Brad Pitt creates his most memorable role ever. Pitt’s furious energy and maniacal character are really what makes Fight Club what it is, a generation-defining cult classic. His chemistry with Edward Norton is incredible. In this role, he is mysterious, hilarious, unlikable, irresistible, enthusiastic, and pissed off, all the while having this unbridled physical energy about him that brings him to life. It is one of the most unforgettable characters in recent film history, and I honestly cannot imagine another actor playing the part nearly as effectively.

3. Twelve Monkeys (character: Jeffrey Goines; 1995)
In what will go down as Pitt’s most underappreciated role, his Oscar-nominated turn in Twelve Monkeys is one of the most impressive performances he has ever given. Here, he plays an insane person with an unrestrained psychotic energy about him. This is one of his biggest steps out of the box, and while it may seem like he takes it too far, he somehow avoids caricature. Of all the over-the-top psych-ward inhabitants we have seen on screen, Pitt’s Jeffrey Goines may be one of the most believable and devious. It is a volatile performance that really shows off what Pitt can do when he gets a great role.

2. The Tree of Life (character: Mr. O’Brien; 2011)
Pitt’s performance in Terrence Malick’s ambitious epic is unquestionably his most mature performance to date. He plays a rough, unlikable, hard-working, disciplinarian father/husband. He completely disappears into the role. In almost every one of his serious turns there is still are still relatable and affable traits about the character. In The Tree of Life, however, there is none of that. His performance is first and foremost physical, with tight, troubled expressions. He has a few outbursts, but most of the pain of the character is internal and shown on his face. For a role originally intended for Heath Ledger, would say that Pitt filled those shoes admirably. It would have probably been a slightly different dynamic with Ledger in this spot, but I am not sure it could have been any better than what Pitt accomplished.

1. The Assassination of Jesse James by the Coward Robert Ford (character: Jesse James; 2007)
I know that this cannot be everyone’s choice for the top spot, but I do not think I have ever been more haunted by a character that Pitt has played than I was when I first saw Jesse James. Even though Casey Affleck was nominated and decidedly better in the film (a top 5 performance of the 2000s), it is Pitt’s weary and sensitive performance that lingers in the memory of the film. He is incredibly restrained and subtle. His character is at times depressed, and just by looking at how Pitt carries himself you can see a wounded spirit. His performance is cool and calculated with a twinge of menace and edginess. It is the most complete performance that Pitt has ever given and one that will stick with me forever. It may not be his showiest role or most iconic character or biggest step outside his comfort zone, but for me, this is his best work to date.

So, there you have it. Agree/Disagree? I know Jesse James cannot a popular choice for #1, but does anyone else have it ranked highly? What are your favorites? Let me know in the comments or on our Facebook page.
Posted by Todd Plucknett at 12:11 PM