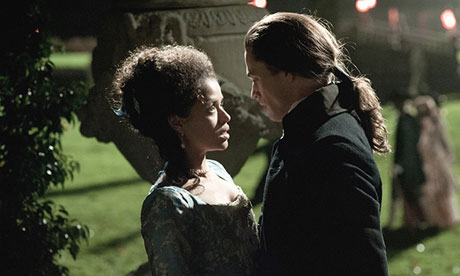 
The real strength of Belle is the way it shows how covert racism reared its ugly face even within supposedly “polite” Victorian society.  Sure, there were occasional blatantly racist individuals like Oliver’s vulgar younger brother James, who turns into Jason Alexander in Pretty Woman when he gets a moment alone with Dido.  But for the most part, we see that racism was carefully embedded within social decorum, which meant that although it was rarely ever explicitly acknowledged by the “enlightened” aristocracy, it nonetheless still existed.  There is a vivid illustration of this toward the end of the film, when a white character who we’ve assumed has carried mannerly attitudes toward Dido instead reveals her true prejudiced attitudes about Dido’s race.  In an unusual way, Belle demonstrates how open discussions of race in Victorian society paralleled the taboo nature of sexual desire – the further repressed they were, the longer the injustices and disillusionment of the society remained firmly entrenched.

One of the trends that has developed throughout this season of Saturday Night Live is giving some of the industry's top comedic talents their third chance to host.  So far this year, we have had Paul Rudd, Jonah Hill, and Melissa McCarthy.  Now joining the party is Seth Rogen.  When Rogen is involved, there are two things that are sure to come: gross-out humor and marijuana jokes.  Both appeared several times throughout the night.  However, just because it was expected didn't make it any less funny.

In just a couple years, there will be another presidential election upon us.  One of the big questions leading up to that time is how will the Republicans make themselves more appealing to pop culture.  SNL has an answer to that question: send your party leaders to one of the biggest music festivals of the year.  This is what puts Jeb Bush, Paul Ryan, and Rand Paul at Coachella.  In the ultimate fish out of water scenario, about as much awkwardness that you are imagining can be found in this sketch.  I wouldn't call it a great sketch, but it is definitely a strong opening to the show.

Seth Rogen comes out addressing a couple elephants in the room.  Would there be any pot jokes? Yes.  Would any of his crazy buddies show up?  Yes, and more.  He started by reading his diary entries from the week after saying that his first two turns as host were such a blur he wanted to remember this one.  Throughout his reading, as he is saying that he doesn't want any help with his monologue, slowly Zooey Deschanel, James Franco, and (quite randomly) Taylor Swift come out to assist.  Swift does have a great one-liner to cap off the bit.

I am really starting to enjoy Weekend Update with Colin and Cecily.  There is an edge there that Seth Meyers had lost over his last couple years.  With their first featured guest, they bring out Big Papi, David Ortiz from the Boston Red Sox.  Kenan doesn't give great impressions, but more shoots for the essence of the character (or caricature many times).  This is a perfect example of that.

Next came one of my favorite characters they bring out.  Jacob the Bar Mitzvah Boy is always a welcome sight as he explains Jewish holidays in a half-speech, half-family roast.  This was the first time Jacob worked with Cecily instead of Seth, which was a seamless transition.

There weren't really many sketches that soared above average in this episode.  This was one of them.  Two best friends are discussing whether or not to get a life-changing surgery ... because their monsters.  The surgery makes them look like humans.  The sketch was pretty hilarious as you discover who is behind those monsters.

There were definitely a few clunkers.  This sketch I just did not get, as it featured one of the few characters brought to us by Cecily Strong that disappointed.  At an engagement party for Seth Rogen and Vanessa Bayer, Cecily shows up as Seth's cousin and crudely brings up embarrassing moments in his past.  It just doesn't work, and you can kind of tell the stars know it too.

I am really starting to fall in love with the Kyle Mooney random nightcap of the week.  It is really giving him a niche to make him memorable.  With 8 featured players this year, you know not all of them can make it to next year.  They aren't getting rid of Shasheer Zamata after the flack they got that led to her hiring, and Colin Jost and Mike O'Brien aren't going anywhere after they pulled them out of the writing room into the cast.  It's sketches like this that will keep Kyle Mooney and his best bud Beck Bennett around.  (Beck isn't featured here, but often is.)  This latest digital short celebrates Seth Rogen's favorite holiday: 4/20.  Kyle is a little too convincing as a stoner telling of the legends behind Pot Day.  This sketch was just beautifully weird.

I love Seth Rogen, but this episode really ended up a little too bland to be up to par for Seth.  Of the 3-timers, this episode is near the bottom of the list.  The best episode of the night didn't even involve your host.  With that said, there was still enough there to make this an enjoyable episode.  There were a lot of fun moments, but a year from now, this is one of the episodes from this season I don't remember existing.

Posted by Terry Plucknett at 7:28 PM No comments: