The Arizona Diamondbacks had one of the most surprising and active offseasons of any team in baseball.  Will it lead to greater success in 2016? 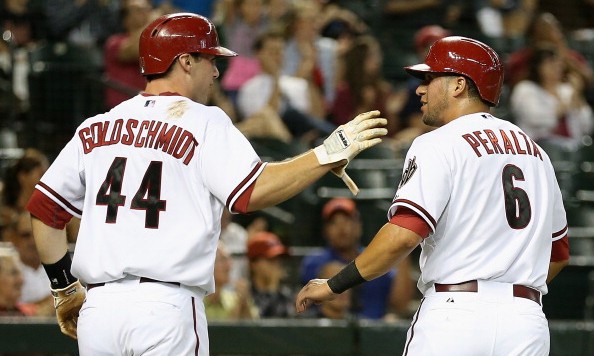 The D-Backs were one of the quiet surprises of 2015.  They kept their record right around .500 thanks to strong hitting from AJ Pollock and perennial MVP candidate Paul Goldschmidt.  If it is possible for a team to have one of the best players in baseball, over-achieve on expectations, and no one notice, the Diamondbacks pulled it off in 2015. Arizona shocked the baseball world this offseason.  Nobody saw it coming.  Of course, I am referring to the new Diamondback uniforms.  No, just kidding!  Zack Greinke!!!  Would he sign with the Dodgers?  The Giants?  In about 12 hours, the D-Backs went from being irrelevant in the sweepstakes to signing the prize of the offseason.  They did not stop there either.  If they were getting Greinke, they were going all in.  They traded for starter Shelby Miller, willing to give up their number one draft pick, Dansby Swanson, to get him.  Obviously, the Diamondbacks believe that baseball right now is highly over-valuing prospects.  They were willing to go get their guy, and no one was untouchable.  They then traded for Jean Segura and signed Tyler Clippard to round out the renovation of their team.

Part of that Shelby Miller deal was also Ender Inciarte, a quality outfielder that gave them good production in 2015.  Then, in the last Spring Training game, AJ Pollock breaks his elbow and might be out for the entire season.  This puts a lot of pressure on a guy like Yasmany Tomas.  Tomas was signed last year as a potential Cuban superstar.  He was productive, but far less than a superstar in his first year in the big leagues.  With no Inciarte and Pollock, they need Tomas to take a huge step forward and help lengthen this lineup that all of a sudden has a few holes.

The Diamondbacks have a brand new top two of their rotation with Greinke and Miller.  However, the ace of this staff at one point was Patrick Corbin.  He was an All Star in 2013 and poised to progress into a top pitcher in the game.  Then Tommy John surgery before the 2014 season put him out for a year and a half.  He pitched all right in his limited time in 2015, but now he is two years removed from his surgery and should be close to 100% now.  If he is, this rotation can be one of the best in all of baseball.

The Diamondbacks seemed to have sold most of their top prospects over the offseason to improve the team right now, however they had the depth in their system to work with.  They have several player ready to produce now, with several (Brandon Drury, Socrates Brito) making the Opening Day roster.  they also have several pitchers ready to join the rotation behind Greinke, Miller, and Corbin.  Archie Bradley made his big league debut last season with mediocre results, but he should be ready to go as soon as there is a spot for him.  Watch for Bradley and fellow phenom Braden Shipley to make an impact on this team at some point this season.  Both would probably be in the rotation to start the year if it weren't for the active offseason.

I made this prediction before the Pollock injury, but now I am even more sure of it.  The Diamondbacks are definitely a much better team this year.  They have improved in so many areas.  However, I think it will take a year for them to truly fulfill their potential.  I was really big on the Padres last year, and it blew up in my face.  This is a different situation because I think the D-Backs are committed to this plan long term where the Padres gave up by July.  They will be improved in 2016 and finish over .500, but the top of the division is too hard to crack ... yet.


Fearless Prediction
The Diamondbacks' starting centerfielder on August 1st is not currently on the roster. It looks like the Diamondbacks did not have much of a contingency plan when AJ Pollock went down the other day.  Their current plan is to move infielder Chris Owings, who hasn't played the outfield since high school, to centerfield.  They also have rookie Socrates Brito that might see some time there, but this looks like a situation the front office will try and remedy in another way after not too much time.  I wonder what it would take for them to bring back Ender Inciarte...

Posted by Terry Plucknett at 5:55 PM