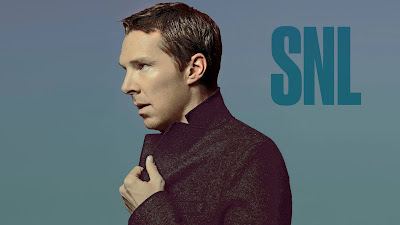 One of the biggest rising stars over the last bunch of years has been Benedict Cumberbatch.  It only made sense that he would find his way to the Saturday Night Live stage eventually.  His hosting debut, as well as the fact that this was the last episode before the election, made this an episode to pay attention to.


Cold Opening
http://www.nbc.com/saturday-night-live/video/hillary-clintondonald-trump-cold-open/3421101
This was the last Cold Open before the election.  The typical Trump vs. Hillary fights took an interesting detour here.  The sketch started as you would expect with the caricatures (sometimes appearing more lifelike than the real thing) continuing to hurl insults at each other.  Eventually, Alec Baldwin breaks character to stop the insults.  Instead, the two go out into Times Square and spread the love instead of the hate they had been doing.  It all ends with an urge to get out and vote.  It was a touching way to end such a divisive and bitter election season.


Monologue
http://www.nbc.com/saturday-night-live/video/benedict-cumberbatch-monologue/3421102
Anything that was touching and inspiring ended when the monologue started.  I'm not saying it was bad.  It was just back to SNL as usual.  The key to a successful hosting gig for such a serious man as Benedict Cumberbatch is to refuse to take yourself seriously.  This started in the monologue as he provides a song, complete with dancing girls, about who he is and why he is important.  It was one of the more refreshing monologues of the season to date.


Best Sketch
http://www.nbc.com/saturday-night-live/video/why-is-benedict-cumberbatch-hot/3421106
Continuing in the vein of making fun of the host and his vanity, we have a new game show.  The premise is Beck Bennett convinced several of his cast mates to join him for a mystery game show they would come to find out was entitled, "Why Is Benedict Cumberbatch Hot?"  One of the contestants was Cumberbatch himself who seemed to be just as confused about the fact as Beck.  The best part is the girls really don't have an answer other than the fact that they swoon every time they see him.

http://www.nbc.com/saturday-night-live/video/surprise-bachelorette/3421108
An honorable mention here is the World Champion Chicago Cubs showing up at a Bachelorette Party.  Good times...


Weekend Update
http://www.nbc.com/saturday-night-live/video/weekend-update-on-the-final-days-of-the-election/3421110
http://www.nbc.com/saturday-night-live/video/weekend-update-on-male-birth-control/3421111
If you are going to have World Series Champions show up, you might as well use them over and over.  It makes it easier when the Cubs' biggest fan is a former castmember.  Insert three Cubs and Bill Murray singing the Cubs Song live from New York.  This is the most memorable Weekend Update guest to date this season.


Dark Horse Sketch
http://www.nbc.com/saturday-night-live/video/criminal-mastermind/3421115
There is something about Brits that make them appear to be criminal masterminds.  The show takes advantage of this, using their host as a criminal genius that works through riddles.  However, what happens when the good guys figure out every riddle?  Comedy, that's what happens. 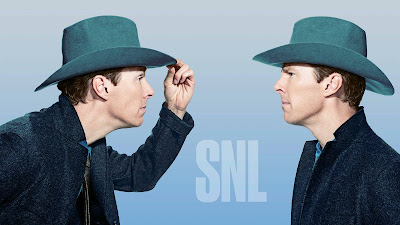 It is always refreshing to see a big star like Benedict Cumberbatch not take himself too seriously.  This was shown over and over again throughout this episode, as he constantly was willing to be the butt of so many jokes.  This led to many really strong sketches and very few that could be considered disappointing.  Add to the episode the fact that it was the show's last chance to put its stamp on the election, and you ended up with a very strong show.

Posted by Terry Plucknett at 8:16 PM