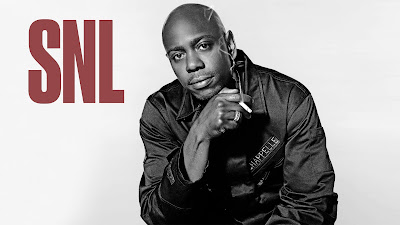 There were several things that made this episode notable.  First, it was the long-awaited debut of Dave Chappelle on the Saturday Night Live stage.  Having a claim to fame be a sketch comedy like Chappelle's Show, it felt long overdue for this to happen.  The second thing that made this episode notable was the fact that it was the first episode after Donald Trump defeated Hillary Clinton in the US presidential election.  This would be a common theme throughout the episode.


Cold Opening
http://www.nbc.com/saturday-night-live/video/election-week-cold-open/3424949
This is one of my favorite Cold Openings of all time.  The previous episodes made it no secret that the SNL writers and cast were rooting for Hillary Clinton in the election.  I was very curious to see how they were going to react to such a surprising and, for them, disappointing result.  This Cold Opening was the reaction, as they produced not only a simple and pointed moment featuring Kate McKinnon in her Hillary costume, but it also served as a touching tribute to the recently departed Leonard Cohen.  It is one of those moments you remember.


Monologue
http://www.nbc.com/saturday-night-live/video/dave-chappelle-standup-monologue/3424955
I have always said the best monologues are the ones by someone used to having a stage to themselves.  Dave Chappelle is an amazing stand-up comic.  Combine that with the recent election results and you have a reflective, poignant, and funny rant on our world.  Television has missed Dave Chappelle, and this sketch proves it.

Best Sketch
http://www.nbc.com/saturday-night-live/video/election-night/3424956
The commentary on the election was not limited to the Cold Opening and the Monologue.  This hilarious sketch actually provides an interesting critique on all the people that felt Clinton's win was a foregone conclusion.  Leave it to Chappelle, with the help of Chris Rock, to see this side of the coin.

http://www.nbc.com/saturday-night-live/video/walking-dead-chappelles-show/3424957
An honorable mention is this sketch, which I would have found much funnier if I watched The Walking Dead or ever watched Chappelle's Show.  It was worth mentioning for anyone that has watched one or both of these.


Weekend Update
http://www.nbc.com/saturday-night-live/video/weekend-update-on-presidentelect-donald-trump/3424959
http://www.nbc.com/saturday-night-live/video/weekend-update-on-female-minorities-elected-to-the-senate/3424960
Weekend Update seems to be the one of the places they are going to really be critical of the political environment.  In the hands of Jost and Che, this is comedy gold.  The one guest to the desk this episode was Supreme Court Justice Ruth Bader Ginsburg via Kate McKinnon.  Maybe she can wait 4 more years before she retires.


Worst Sketch
http://www.nbc.com/saturday-night-live/video/jheris-place/3424962
Not everything could be about the election.  This sketch was purposefully bad.  It took a little while to figure out exactly what was going on, and once you did, the payoff wasn't really worth it.  It was a very creative sketch though as we watched the post-sketch press conference after a rough performance.


Dark Horse Sketch
http://www.nbc.com/saturday-night-live/video/love-and-leslie/3424965
The definition of a Dark Horse Sketch is something featuring Kyle Mooney's strange brand of comedy.  This was the first time Kyle was allowed to be Kyle this season as it is revealed that he and Leslie Jones are dating.  Let the awkward hilarity ensue. 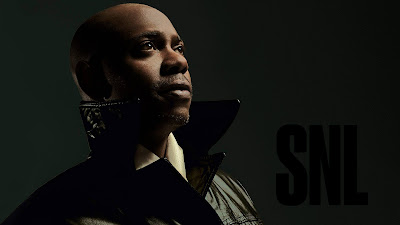 Why did it take so long for Chappelle to make his debut on SNL?  They pretty much had to pull him out of retirement to get him to host this episode.  However, it really felt like the right host at the right time.  A comedian like Chappelle knows how to put things into perspective, which was desperately needed after the controversial election.  It led to possibly the best episode of the season so far.

Posted by Terry Plucknett at 1:21 PM