Over the years I have written several articles speculating ways the NCAA can improve how it treats college football's highest level.  I have looked at 16 team playoffs, Super Conferences, and creating a new division for the Power 5 conferences.  I even wrote an article simply giving the NCAA 5 ideas how they can fix everything.  Over the last 3 years, an attempt has been made to fix many of the issues with the start of the College Football Playoff.  However, there are still many more things they can do to perfect the system, including expand the playoff.

First, everyone looks at strength of schedule in the college football resumes.  Some schools schedule FCS cakewalks, and some schools refuse to play road games (Bama, I'm looking at you), and some schools schedule a tough group of games and get penalized for extra losses at the end of the season.  I mentioned this in my previous article, and I think it is still needed.  The NCAA needs to set rules on schedules.  Here are a couple rules that would help level the playing field.

1.  FCS schools can be scheduled as preseason games only. 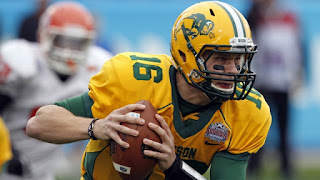 I understand the concept of scheduling FCS schools.  I understand that some of the FCS programs rely on the dues they are paid to play these games.  They can no longer count as a part of the regular schedule.  Schedule them as preseason games in August.  Everyone would love this!  It would allow college football to be relevant much earlier, everyone would get a preview of what their team looks like, and the teams would get a chance to have a true game before they counted.

2.  Regulate what the non-conference schedule has to be. 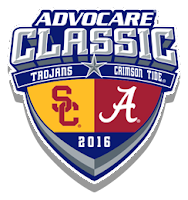 3.  The non-conference schedule must be completed before conference games start. 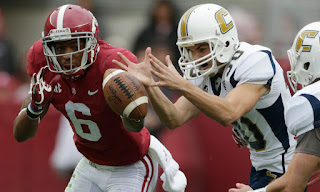 
Those are my rule proposals to help level the playing field when it comes to schedule.  Now let's talk about this playoff.  I was a big supporter of a 16 team playoff for awhile.  However, once the 6 BCS conference shrunk to the Power 5, and once the College Football Playoff was established, my opinion was adapted.  Although the current CFP is a step in the right direction, there is still much more that can be done, and 2016 is the perfect example to prove me right.  Here are the main flaws with the current system and why an 8 team playoff would be better. 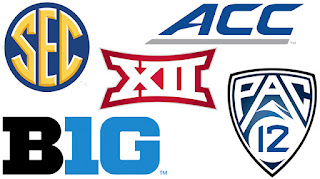 How can the NCAA claim to have a "Power 5" conference division and yet only allow four teams into the playoff.  In the 3 years of the CFP, the Big 12 has been left out twice, while the Pac 12 was left out last year.  If you have 5 conferences, you should have at least 5 playoff spots.  Either that, or keep the 4 team playoff and make it a Power 4 conferences.

2.  It's hard to win a conference, and it should be rewarded. 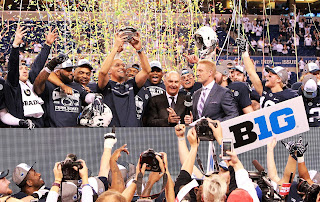 This is the first year a team made the CFP without winning their conference championship.  Now, with Ohio St.'s play and resume, I doubt anyone would have much of an argument that they don't belong.  However, this means that for the first time, two conference champions were left out.  I don't think the NCAA and the CFP truly appreciate how hard it is to emerge out of a conference as the champion.  Regardless how strong your conference is, the natural rivalries that develop when you play a team every season make anything possible during conference play.  Washington almost lost to Arizona, Clemson almost lost to NC State, Michigan lost to Iowa.  All three of those are considered inferior opponents this season.  In fact, only two Power 5 schools this season were able to navigate their conference schedule unblemished: Alabama and Oklahoma.  Penn St. and Oklahoma deserve a shot at the championship simply because they won their conference.

3.  Half of the FBS schools have no chance of winning the National Championship. 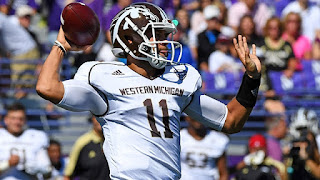 This was my main argument for a 16 team playoff.  How can you claim to have an FBS division when half of your teams have no shot to win the championship.  Western Michigan did everything they were supposed to do this season.  They scheduled a tough non-conference with two Big 10 teams.  Then they ran the table, finishing 13-0 with a conference championship.  Their final ranking by the CFP committee was 15th.  The CFP made a step in the right direction by guaranteeing a spot in a New Years 6 bowl game for the best Group of 5 team, but they deserve a shot at the whole thing.  When you have a subjective judging method, there will always be bias involved towards the big brands and away from those not traditionally elite.  Many analysts were even saying Washington's spot in the playoff would be nowhere near as disputed as it was if it had been a school like USC fighting for that spot with the same resume.  There needs to be a little more objectivity in the system.


Let's talk about how an 8 team playoff would work and why it would be better.  First, it would truly reward a great season no matter who were.  Power 5 conference champions would be guaranteed a spot.  There would also be a guaranteed spot for the best of the Group of 5.  Many people claim that expanding it to 8 would make the regular season less exciting.  Well, those same people said the same thing about expanding it to 4.  The reality is it is more exciting when more teams are in contention.  This year, Bedlem decided a conference champion.  What if it was for a guaranteed playoff birth?  Few were paying attention to Florida winning their division in the SEC.  What if that win got them into a play-in game for the playoff?  It wouldn't lessen the excitement of the regular season.  It would make it more exciting simply because more games would matter.

Let's talk logistics.  The system would not have to change much.  The playoff would start two weeks after the conference championships (when the bowl season starts).  The first round of the playoffs would take place at the home of the higher ranked team.  There would be 4 of the New Years 6 bowl games set aside.  Two of these games would act as semifinals like they do now.  The other two bowl games would include the losers from the first round of the playoff.  This way everyone still gets the bowl game experience, as well as having two weeks to prepare.  The 8 team field would include the Power 5 conference champions, the best of the Group of 5, and two Wild Cards.  The job of the committee would then be to choose the two Wild Card teams and seed the 8 teams.  Here is how it would look this year, and I dare you to tell me this wouldn't be more exciting than what we have.  Talk about a quadruple header!

The Broncos deserve a shot.  They wouldn't have much of a shot, but let them play Bama and see if they belong.

Do you want to know which one belongs in the Top 4?  Let them play and find out!

Most people would claim that these are the two worst conferences in the Power 5 right now.  This would be a fascinating matchup that I would love to see.

You would almost want to have a rule saying no inter-conference games in the quarterfinals, but would anyone argue with a rematch of the best game this season?


All of that in one Saturday.  How exciting would that be!  If these truly are the best four teams, then they would prove it by winning.  In the past, I have called it Holiday Madness because it would recreate some of the magic basketball finds in March.  What makes 2016 the best year so far to do something like this is there are truly 7 teams (8 if you include Western Michigan) that have a legitimate claim to one of the four spots.  So let's make enough spots for them all!

Posted by Terry Plucknett at 3:56 PM