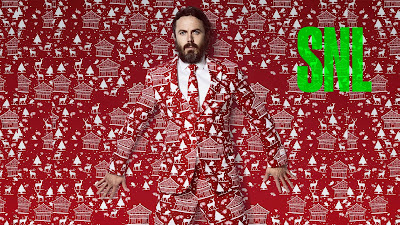 It's rare that a host makes his SNL debut on the Christmas episode, but alas, this is what Casey Affleck does.  His family does have a track record with the show, as his brother Ben is one of the more recent inductees into the "5-Timers Club."  That makes the Afflecks the first set of brothers to host SNL since Peyton and Eli Manning.  Also, experts say Casey will be an Oscar winner in just a few short months for his new film Manchester by the Sea.  So I guess he is a worthy candidate to host such a big show.  But can he do comedy?


Cold Opening
http://www.nbc.com/saturday-night-live/video/donald-trump-christmas-cold-open/3442500
The last Cold Open of 2016 was the most scathing when it comes to the show's criticism of President-Elect Donald Trump.  As more and more information comes out about the Russians hacking our presidential election, SNL decided to connect the dots by having Putin visit Trump for Christmas.  The sketch also included John Goodman as Rex Tillerson, Exxon CEO and Trump's choice for Secretary of State, acting like BFF's with Putin while Trump cluelessly watches on.  Once they referred to Trump as Putin's Manchurian Candidate, you realize that the SNL writers are not pulling any punches.


Monologue
http://www.nbc.com/saturday-night-live/video/casey-affleck-christmas-monologue/3442501
It really felt like  they didn't know what to do for Casey Affleck's monologue.  He made it very clear throughout the monologue that he wasn't going to sing.  However, he really didn't have anything else to do either.  He talked about his career, and had some good one-liners along the way.  Baldwin and Goodman came out to fulfill the star-studded cameo checkbox.  That was about it.  It was one of the most confusing monologues I can remember.


Best Sketch
http://www.nbc.com/saturday-night-live/video/dunkin-donuts/3442502
This was an easy one.  Casey Affleck is at his best when he is able to be a stereotypical Bostonian.  So here we see him at his best in this commercial for Dunkin' Donuts.  They are trying to brand themselves as a competitor for upscale coffee places like Starbucks, but it will always be the choice for average Joes.


Weekend Update
http://www.nbc.com/saturday-night-live/video/weekend-update-on-russia-hacking-the-election/3442507
http://www.nbc.com/saturday-night-live/video/weekend-update-on-donald-trumps-inauguration/3442508
What would a Christmas episode be without more cameos?  Among the many great jokes from Jost and Che, you also have the not-that-rare cameo of Fred Armisen.  He and Vanessa Bayer reprise their bit as Putin's Best Friends from Growing Up.  It's a great bit, but it didn't quite have the zing it did when it first debuted.


Worst Sketch
http://www.nbc.com/saturday-night-live/video/new-york-now/3442510
There were several mediocre (at best) sketches in this episode.  This was definitely the lowest on the totem poll.  It tells the story of a New York local theater group doing a nativity comedy.  The show is terrible, and so is the sketch.  Making fun of bad comedy doesn't really make good comedy.


Dark Horse Sketch
http://www.nbc.com/saturday-night-live/video/hillary-actually/3442511
Like I said, most of the episode was mediocre.  This sketch was clever although not necessarily a "Dark Horse."  The week after this episode aired, the electors were set to cast their votes making Donald Trump's election as president official.  This sketch had Hillary Clinton begging electors for votes in the vein of Christmas film Love Actually.  It was a clever and smart way to show the last ditch effort Hillary had to try and pull off the election win. 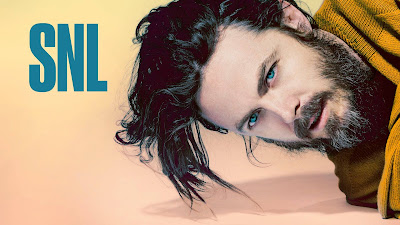 The question coming into the episode was whether Casey Affleck could handle the comedy.  Although he seemed to do an okay job as host, the episode overall seemed to underwhelm.  In fact, several of the sketches were simply less funny retreads of sketches used when Ryan Gosling hosted this time last year.  I find it interesting they put Ryan Gosling and Casey Affleck in the same category of host, but that's a conversation for another time.  Anyways, this episode reminds me of another episode in the last few seasons.  A few years ago, SNL decided their season finale would be hosted by Ben Affleck as he was inducted into the "5 Timers Club."  The episode in general was disappointing and nothing special.  I feel the same about this episode, and it is a complete coincidence that it is another Affleck that was hosting.  However, it holds true.  Honestly, my biggest disappointment was the lack of a Ben Affleck cameo.  It just made too much sense, yet never happened.  So sad...

And that has us caught up!  Coming next on the SNL lineup is Rogue One star Felicity Jones in only a couple weeks.
Posted by Terry Plucknett at 5:27 PM