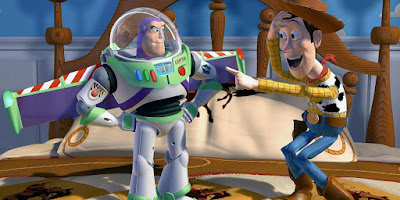 We are finally at the Final Four films in the Movie Battle, to determine the Number One Disney Animated Film.  Its been a crazy road up to this point.  A lot of good stories have come from this tournament!  We watched higher ranking films not even make the second round.  We watched as underdog films made the elite eight!  It's been fun seeing the films battle for the top spot, but now we are down to just four films left!

Here are the results for the 3rd round!

Pixar Bracket:
#1 Toy Story 52.94% holds off #7 The Incredibles 47.06%  (The Incredibles almost had the up set.  They were leading the whole week until the very last day of voting and lost by two votes.)

Wild Card Bracket:
#3 Aladdin 53% upsets #1 Pinocchio 47% (Aladdin had the lead the whole week and never gave it up.  Did the Genie help it win?)

Here are the match ups for the Final Four!

Princess vs Talking Animal: #2 Beauty and the Beast vs #1 The Lion King