Movie Milestones: 25 Years of A League of Their Own - Best Quotes

This first weekend in July marks the 25th anniversary of A League of Their Own, a film about the short-lived women's baseball league that was formed during World War II.  This is one of my all-time favorite movies.  It will make you laugh, make you cry, motivate you, and make you laugh some more, all while doing justice to America's pastime.  One of my favorite parts of this movie is it is endlessly quotable.  So to celebrate this movie milestone, I decided to count down the best A League of Their Own quotes.  So without further ado, let's play ball!

Doris: "That was some good peeing!" 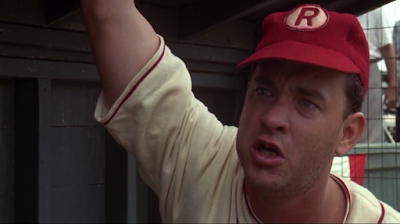 Helen: Have any of you seen my new red hat?
Dottie: Piss on your red hat!
Helen: Well that seemed uncalled for... 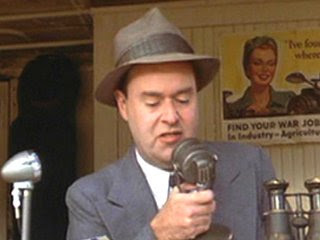 (No clip available)  One of the unsung heroes of the cast of A League of Their Own that never gets recognized is the stadium announcer for the Rockford Peaches.  He has a perfect voice for the time period, as well as some great one-liners that you don't hear out of announcers these days (outside of maybe John Sterling and Hawk Harrelson).  As the dramatic championship game ends, he utters this beauty that is the perfect way to sum up the game that just concluded.  A close second in his quotes would be, after a line drive up the middle that almost hit the pitcher, "Well bite my butt and call me an apple!  She nearly took her head off!"

Oh Stillwell Angel ... constant entertainment for viewers, constant headache for the players.  The young son of outfielder Evelyn Gardner, Stillwell becomes almost a mascot of the team as he is a constant presence in the Peaches' clubhouse.  His constant teasing of manager Jimmy Dugan, chanting, "You're gonna lose," comes up several times throughout the movie.  What is even better is all the little things that take place with Stillwell, like when he eats a chocolate bar so fast he almost eats the wrapper, or when he eats the lineup card before a game, or when he makes Jimmy Dugan exclaim, "Hey, I don't know what that kid is doing, but someone get him away from that tape!  Stillwell!"  I think we all were cheering on Jimmy before the championship game, when Stillwell was proclaiming his familiar phrase, Jimmy pelts Stillwell in the face with a baseball glove.  "HA HA!!!  GOT HIM!!!"

8.
"I was going to send you a thank-you card, Mr. Harvey, but I wasn't allowed anything sharp to write with." 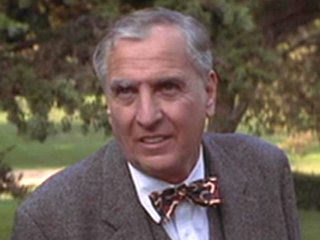 (For some reason, I can't find a clip of this scene anywhere...)  In a movie like A League of Their Own, there are sometimes entire scenes that deserve being considered a quote.  This is one of those instances.  This quote wraps up an exchange where we meet both Mr. Harvey, a millionaire starting the women's baseball league, and Jimmy Dugan, a broken-down drunk of a retired baseball player.  Mr. Harvey is offering Dugan a coaching job with the Rockford Peaches, but first they have to hash out some of their history, including Dugan managing a minor league team for Mr. Harvey where he sold off the team's equipment to pay for booze.  Throughout the scene, you see how Mr. Harvey has a soft spot for Jimmy Dugan, and how Dugan fights through his personal demons with wit and humor.  The full exchange goes like this...


Harvey: You're a young man, Jimmy.  You still could be playing, if you just would've laid off the booze.
Dugan: Well, it's not exactly like that ... I hurt my knee.
Harvey: You fell out of a hotel.  That's how you hurt it.
Dugan: Well, there was a fire.
Harvey: Which you started, which I had to pay for.
Dugan: Well now, I was going to send you a thank-you card, Mr. Harvey, but I wasn't allowed anything sharp to write with.

Miss Cuthbert seems to be one of most tortured characters of the whole movie.  Whether it be getting poisoned so the girls can sneak out to a bar ("In my 43 years I've been practicing medicine, I never saw a woman throw up so much!"  "I think it's how she entertains herself, Doc.") or getting dirt thrown in her face by disgruntled employees, she seems to be forced to be in a bad mood all the time.  On one road trip, Stillwell is causing mayhem on the team bus which eventually leads to the bus driver quitting (enter dirt thrown in the face).  Miss Cuthbert now is forced to wake up Jimmy Dugan from his alcohol-induced nap to inform him what has happened.  His first reaction when waking up from his drunken stupor is to plant a wet one on the woman standing over him.  When he realizes what he did, he quickly screams, rinses his mouth out with more booze, and asks what is going on ("Why did we stop?"  "Lou quit."  "WHO'S LOU?!?!?"  "The driver.").  When Dugan calms down, he looks at Miss Cuthbert, wearing her little hat with her face covered in dirt and says this line.  It's an observation you never would have noticed unless it was pointed out, but once it was, all you can see the rest of the movie when you see Miss Cuthbert is a flying monkey.  Poor Miss Cuthbert...

Jimmy Dugan is not a religious man, however he has his moments where he figures it is worth a shot.  Before the championship game, he gets the team to kneel down for a prayer.  It is a moment that displays Jimmy Dugan's personality and transformation throughout the film.  Some of the girls are a little taken aback at the idea, and even more taken aback after they hear his prayer.  However, it shows just how much Dugan has come to care for his team of ballplayers, and also how he hasn't really changed at all.  Here it is:


"Uh, Lord, hallowed be Thy name.  May our feet be swift; may our bats be mighty; and may our balls  ... be plentiful.  Lord, I'd just like to thank You for that waitress in South Bend.  You know who she is - she kept calling Your name.  And God, these are good girls, and they work hard.  Just help them see it all the way through.  Okay, that's it."


5.
"You ever hear Dad introduce us to people?  'This is our daughter Dottie, and this is our other daughter, Dottie's sister.'  Should've just had you and bought a dog!"

No other quote so clearly sets up the primary relationship and conflict of the entire movie.  Although this is a baseball movie, at its core it is the story of two sisters: the older sister that does everything right and everyone loves, and the younger sister that is always trying to emerge out of older sister's shadow.  Younger sister Kit says this line near the beginning of the film, and it sets the tone for the rest of the movie.  Kit is defined by being Dottie's sister and, in her mind, nothing she does will ever change that.  It is a humorous way of showing a somewhat heartbreaking disposition that many people can relate to.

For some reason, this song has always put a smile on my face.  Throughout the film, one of the characters (Evelyn) is writing a song about what it is like to play in the league.  At different times during the movie (most notably at the end during the Hall of Fame presentation), the song is sung by all the women present.  It's a song that shows their spirit, their love of the game, and their patriotism during a time of turmoil for our country.  The best part of this song?  It is the actual song the real girls sang during this league.  Here are the lyrics...

It is quotes like this that make you love baseball.  Dottie is leaving to go home after her husband gets home after the war, leaving her team just before the championships.  Jimmy Dugan has something to say before she leaves though.  He tells her she will regret quitting for the rest of her life.  In another quote that could have made this list, Dugan says, "Baseball is what gets inside you.  It's what lights you up, you can't deny that."  Dottie's response?  "It just got too hard."  That is where the quote here comes in.  In one line, Jimmy Dugan gives one of the most quintessential and inspiring baseball quotes in film history.  It makes me want to go out and swing a bat right now!

In what might be one of the funniest roles of all time, rarely is an actor more perfectly suited to play a role than Jon Lovitz was to play talent scout Ernie Capadino.  Every line he says is quotable.  I could have just made a list of Jon Lovitz quotes from the film.  Seriously, he deserved an Oscar nomination for this performance.  Here are the highlights...

(watching cows being milked) Doesn't that hurt them?  It would bruise the hell out of me.

(after a cow moos during his line) Will you shut up!

(walking through a group of chickens) Haven't you heard of a leash?

You see, the way it works is the train moves, not the station.

(to the farmgirls) Did you promise the cows you'd write?

(to the farmgirls at the ballpark) Hey cowgirls, see that grass?  Don't eat it!

(as he leaves those he recruited) I hate when they get attached to me like that!

Yes, the most iconic quote that has stuck in pop culture the most over the last 25 years is the best quote in A League of Their Own.  However, I love this quote not because of its recognizability, but because of the entire rant Jimmy Dugan goes on to finally arrive at this quote.  Everything from asking Evelyn what team she plays for because of the stupid mistake she just made in the field makes him question if she knows what team she is supposed to be helping to him telling the umpire of his unfortunate phallic resemblance, this entire rant from start to finish is pure gold.  It is one of my favorite rants in all of film.  "I can't believe no one has every called you that before!"

There is my list!  Did I miss anything?  Let me know in the comments below.

Posted by Terry Plucknett at 3:49 PM