The longest grind of the sports year has come to an end as game 162 was played in the baseball season.  (Well, game 161 for four teams for a variety of reasons.)  As always, the season was a wild ride, and now we gear up for some incredible postseason baseball where anything can happen.  Let's stop and take a look at the season that was, how my preseason predictions fared, and what to expect from the Fall Classic. 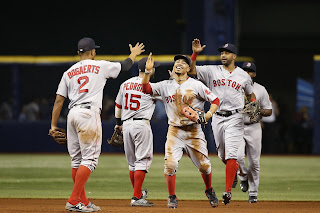 I knew the Red Sox would be back, but I didn't know just how good they would be or that David Ortiz would be historic in his final season.  The Orioles constantly surprise as Buck Showalter proves once again to be one of the best managers in baseball.  One of the biggest surprises of the season was Mark Trumbo leading the league in home runs.  Toronto was able to sneak their way into the playoffs.  I had predicted a division title for the Blue Jays, but some injuries held them back.  At least my World Series prediction is still in tact!  I knew the New York Yankees were taking steps back with Chapman being traded (BOLD PREDICTION FULFILLED) along with Miller, Teixeira retiring, and A-Rod being forced into retirement.  What I didn't predict is how quickly the kids would come out and play like everyone expects Yankees to play.  The Tampa Bay Rays didn't have much going for them entering the season, however they always seem to surprise.  Not this year, as they found themselves in the cellar. 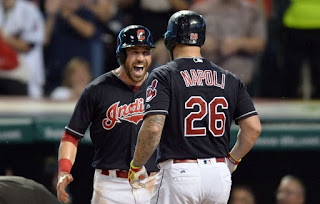 I completely underestimated the Indians.  Not only did the pitching dominate, but the offense was able to produce without Michael Brantley.  The Tigers came up just short as they weren't eliminated until the last day.  They are looking older and older.  Their window might be closed.  The Royals incredible run comes to an end in 2016 as injuries derailed their season over and over.  The White Sox started hot but quickly faded to the back of the division.  Robin Ventura leaving (BOLD PREDICTION FULFILLED) might be a sign of the rebuilding that should have started several years ago.  The Twins were the biggest disappointment of the season as they almost made the playoffs in 2015 only end the season as the only team with 100 losses. 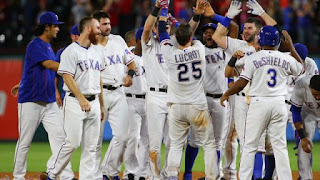 I had the Rangers in the playoffs as a Wild Card, but they showed that last year was no fluke as they dominated the division once again.  The Mariners surprised as they took their rebuilt roster to the doorstep of the playoffs.  Coming up short extends the Mariners' streak without a playoff berth to 15 seasons, the longest active streak in baseball.  The Astros had a bit of a regression this season after a surprising postseason run last year.  Watch for them to come storming back in 2017.  The Angels still have the best player in the world, but they are wasting his prime years as they have no support for him.  Oakland ended the year in full rebuild mode, getting rid of most of their Opening Day roster (BOLD PREDICTION FULFILLED). 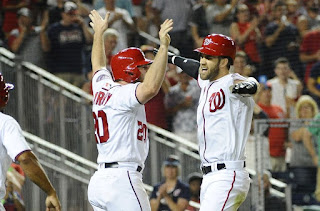 I knew Dusty Baker would be a difference maker for the Nationals, however I didn't know he would be this much of a difference maker.  He turned this team back into an elite squad in one year.  The Mets somehow made it back into the playoffs even though their insane pitching rotation is a mess.  The Marlins had a positive season pointing in the right direction for the future until this last week.  The sudden and tragic passing of superstar Jose Fernandez not only came to define their season, but it has the potential to define every season for the next decade as his absence will be felt for years to come.  (Next year's All Star Game in Miami will be tough without #16 there...)  The Phillies seem to be progressing well in their rebuild as it looks like they might be an impact team sooner than was expected.  The Braves started about as bad as possible, however they ended the season on a positive note and should be riding some good momentum into their new SunTrust Park in 2017. 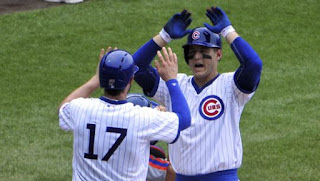 I knew the Cubs were going to be good.  I had no idea they were going to be this good.  I correctly predicted that the Cardinals were finally going to miss the playoffs.  They just needed too many pieces to fall into place.  The Pirates were disappointing this season and are now talking about entertaining trade offers for superstar Andrew McCutchen.  The Brewers are in rebuild mode after trading Jonathan Lucroy to the Rangers (BOLD PREDICTION FULFILLED).  The Reds are stuck somewhere between rebuilding and being stuck with big veteran contracts.  They might not have bottomed out yet. 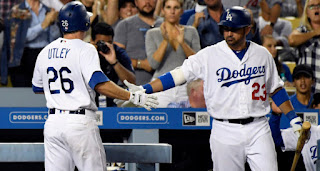 The Dodgers impressed this season under rookie manager Dave Roberts.  Even with an extended injury to Clayton Kershaw, the Dodgers dominated.  (I was so close on my prediction with the Dodgers, but no one wanted Yasiel Puig so he wasn't traded.)  I had the Giants winning the division, which they might have done if they didn't go through one of the most inexplicable second half collapses in recent memory.  They still snuck in to the postseason though so watch out.  The Rockies are showing they are very close to being a contender in this division.  (Again, SO close on my prediction, but they chose to keep CarGo.)  The Diamondbacks proved that their season was over before it started when AJ Pollock went down the weekend before Opening Day.  It also didn't help to have disappointing seasons from their two biggest offseason acquisitions: Zack Greinke and Shelby Miller.  The Padres are trying to be relevant, but their front office is proving to be a little inadequate.

Showalter seems to do more with less every season.  John Farrell turned around the Red Sox with aging superstars, a resurgence of Hanley Ramirez at first base, and Pablo Sandoval spending the whole season on the DL.  However, nothing beats what Terry Francona has done in Cleveland.  He is one of the best coaches of the 21st century.

Joe Maddon might end up winning this as he somehow exceeded the highest expectations on any team in recent memory.  Rookie manager Dave Roberts took a dumpster fire in the Dodgers and won the division despite having a piecemeal starting rotation all season.  However, Dusty Baker showed that old school baseball people still have a place in the new school of sabermetrics.  His work with the Nationals was incredible this season.

The Blue Jays had several pitchers step up and have career years.  JA Happ returned to Toronto and won 20 games, a rare feat in today's game.  Boston's Rick Porcello finally seemed to put everything together as he led the league in wins with 22.  However, Aaron Sanchez was the most impressive pitcher in the AL this season.  Toronto's young ace was even held back due to an innings limit, but still posted some impressive numbers.

Jon Lester showed that he is still the elite starter he was in Boston.  He definitely had more in the tank than many gave him credit for.  Madison Bumgarner once again had an elite season, which makes many teams nervous as they enter the postseason.  However, for the second year in a row, the best pitcher in the National League is a Cubs pitchers nobody knew before the season.  Kyle Hendricks had an unbelievable year that overshadowed what Lester did as well as last year's Cy Young winner, Jake Arrieta.

Robinson Cano went from the most disappointing season of his career in 2015 to career highs in many stats in 2016.  He kept coming up big in the right spots, playing his best baseball in September while his team tried to make the postseason.  The best player on the planet, no matter how bad his team is, is still Mike Trout.  He just keeps getting better.  However, this season belonged to David Ortiz.  He played his best when it was his last.  Look for him to try and be the first DH to win MVP.

One of these days, Nolan Arenado will be recognized for how great he really is.  He led the league in home runs and RBI's this season while playing Gold Glove caliber third base.  Daniel Murphy followed up his amazing postseason last year with an MVP caliber season this year for the Nationals.  However, when in doubt, the MVP is the best player on the best team.  The Cubs were by far the best team, and Kris Bryant was by far their best player.  Look for him to win the award in his sophomore season.

The Blue Jays have waited all season to get back in this position after 2015's postseason.  The game is in Toronto, which is one of the craziest venues in all of baseball.  Toronto will win.  The NL Wild Card game will be a classic.  Noah Syndergaard, the only healthy ace for the Mets, is on the mound against the possibly the best postseason pitcher of all time in Madison Bumgarner.  Look for the Mets to be MadBummed.

The first matchup is an epic rematch from last year.  There is no way the Blue Jays let the Rangers beat them again.  The Red Sox just have too much firepower for an injury-plagued Indians team.  The Cubs are the team everyone is looking to as the favorite, but the Giants have been there before many times and feature the rotation with the proven pedigree.  I said in my preseason predictions that the Cubs would dominate the regular season, but their pitching would run out of steam in the playoffs.  I'm holding to it.  The most intriguing matchup might be the Nats and the Dodgers.  Both teams finally played how everyone thought they could.  I give the edge to the team with the more experienced manager.

The storybook ending for David Ortiz would be to go out on top with a ring.  However, I really think this is the right time for the Blue Jays.  Their pitching is outstanding with Happ, Sanchez, and Marcus Stroman.  They might have the best lineup in the league.  It would be an upset, but I think it's time for the Blue Jays to get back to the World Series.  In the National League, it's Dusty Baker's Nationals going up against his former team in the Giants.  Bumgarner, Cueto, and Samardzija can shut down any lineup.  They know how to peak in the playoffs, and I don't see anything different happening this time around.

Why not go with my original prediction!  I predicted Giants over Blue Jays back before the season started, and I am going to stick to my guns.  After all, it is an even numbered year.  Besides that, the Giants just know how to get it done in the playoffs.  It will be a fun series, but look for a similar result to what we are used to seeing. 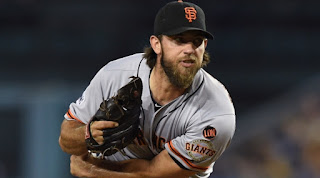 Posted by Terry Plucknett at 9:03 PM