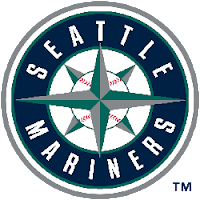 The Seattle Mariners followed up an 89 win season in 2018 with a crazy active offseason that reset their roster for the second time in three years, this time aiming for more sustainable success.  Will all these moves lead to similar success in 2019?


2018 Predictions
3rd in AL West
Ichiro will be released by Memorial Day. 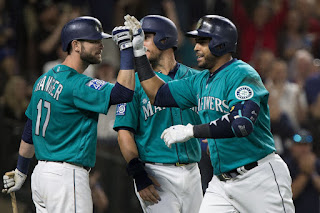 Although the Mariners ended up exactly where I predicted them to be, it says little about the season they had.  For most of 2018, the Mariners looked destined to end their long playoff drought until a tough stretch to end the season, combined with a furious charge by the A's, kept them from the postseason.  Through many ups and downs, including Ichiro only lasting a month (but not leaving the organization) and a half and Robinson Cano getting suspended for steroids, the season had to be considered a success even without the playoff berth. 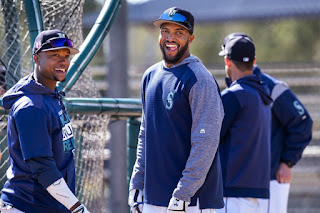 General manager Jerry DiPoto can't help but make move after move every offseason.  This winter saw several blockbuster trades that, as he said, "re-imagined" the Mariners roster.  First, catcher Mike Zunino and outfielder Guillermo Heredia were sent to Tampa Bay for centerfielder Mallex Smith.  Then, second baseman Robinson Cano and closer Edwin Diaz were sent to the Mets for outfielder Jay Bruce, top prospects Jerred Kelenic and Justin Dunn, and reliever prospect Gerson Bautista.  Then, ace James Paxton was traded to the Yankees for pitching prospects Justus Sheffield and Erik Swanson.  Then, shortstop Jean Segura along with relievers Juan Nicasio and James Pazos was traded to the Phillies for shortstop prospect J.P. Crawford and slugger Carlos Santana.  Then, Carlos Santana was traded to the Indians for slugger Edwin Encarnacion.  Then, reliever Alex Colome was traded to the White Sox for catcher Omar Narvaez.  Then, outfielder Ben Gamel was traded to the Brewers for outfielder Domingo Santana.  Then, Nelson Cruz, Denard Span, Cameron Maybin, Nick Vincent, and Erasmo Ramirez left in free agency.  Coming in through free agency were shortstop Tim Beckham, closer Hunter Strickland, and Japanese ace Yusei Kikuchi.  It is like DiPoto treats the Mariners roster the way I would treat my fantasy roster. 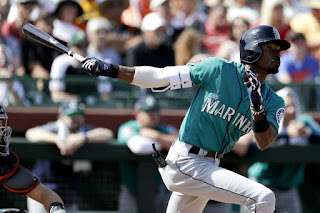 One of the bigger acquisitions of last offseason was speedster Dee Gordon.  After an experiment of putting him in centerfield was thwarted by the Cano suspension, he is entering 2019 as the Mariners starting second baseman.  A former batting champion in 2015, Gordon fought through injuries to a disappointing season of just hitting .268 and an ERA+ of 79.  Looking at Gordon's track record, he tends to alternate good seasons and bad seasons.  2015 was good, 2016 was poor.  2017 was good, 2018 was poor.  Now we are in 2019, and the on base machine should be back at it.  If that happens, he will either emerge as a top veteran leader of this club or be the latest to be traded for more prospects. 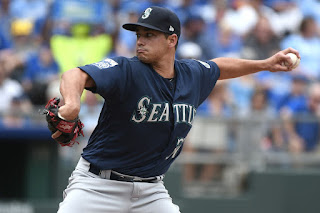 One of the biggest developments of the 2018 season was the emergence of Marco Gonzales as the new ace of the Mariners staff, especially once James Paxton was traded.  Marco's season had ups and downs, but when he was on there were few better.  He will end Felix Hernandez's streak of 10 straight Opening Day starts, and no one argues that he hasn't earned it.  He is now a few years removed from Tommy John surgery, with 2018 being his first full season in the big leagues.  He threw 166.2 innings in 2018.  Before that, his high innings count in the big leagues was 40 innings in 2017.  The biggest question for Marco's 2019 season is whether he will continue to progress and grow into the staff ace or if he will break down from too much work. 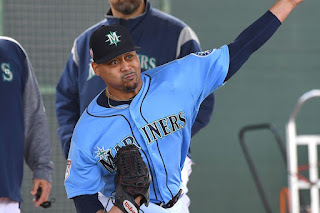 All those trades made this offseason took the Mariners farm system from being worst in the league to almost hitting the top 10.  The best prospect they received is also the one most likely to have a big impact this season.  Justus Sheffield pitched sparingly for the Yankees last season, mainly providing some depth in the bullpen at the end of the season.  However, look for Sheffield to be a staple of the Mariners rotation by the end of this season and join Marco, Kikuchi, and Wade LeBlanc in the super lefty-heavy rotation. 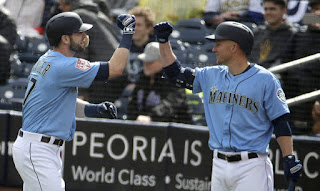 This team is nowhere near as good as it was last year.  Too many productive veterans were moved for too many unproven prospects.  However, the thought behind the moves seems to have been achieved.  If they win 89 games and can't make the playoffs right now, then there isn't much they can do to get over that hump as things stand today.  So take a step back, and live to fight in 2020 and 2021, when some of the powerhouses (Astros, Yankees, Red Sox) may need to start looking at breaking up their current core due to either age or free agency.  That is when the Mariners are now looking at peaking.  They have a shot to be around .500 this season, but they won't be competing for the playoffs much this season.


Fearless Prediction
Felix Hernandez will not finish the season on the Mariners roster. 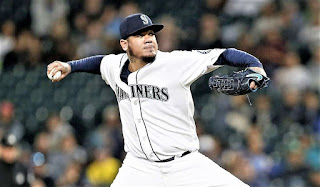 The biggest mystery of the Mariners season is what to do with King Felix.  He has been the team's unquestioned ace for over a decade.  However, the last couple season have seen a falloff in production as his workload seems to have caught up with him.  He is entering his age 33 season and the final deal of his 7 year, $175 million deal he signed in 2013.  Everyone keeps waiting for the second stage of his career to start, but it is looking more and more like it will never come.  With the direction this roster is going, I see only two ways this season plays out for Felix: either he plays well enough to get trade value to be moved or he continues his poor play and ends up released.  Either way, as weird as it is to say for the face of this franchise, but it is hard to see a scenario where Felix Hernandez finishes this season on the Mariners roster.

Posted by Terry Plucknett at 1:08 PM