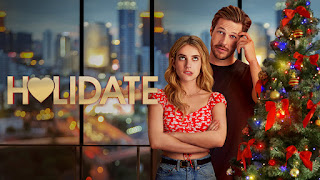 The Story
Sloane and Jackson hate being single on holidays, where they face constant judgement from their meddling families.  So, when these two strangers meet, they pledge to be each other's "holidate" for every festive occasion in the year ahead.
The Cast: Emma Roberts, Kristin Chenoweth, Luke Bracey, Frances Fisher,
The Crew: John Whitesell (Director) Tiffany Paulsen (Writer)
Running Time: 103 minutes
First off, the title for this film is borderline horrible. It’s as if the director had a drinking game in mind when making it because the word is said about a million times. Anyway, Holidate is the latest Netflix romantic comedy to be released and it’s a special kind of movie. I had no previous knowledge about this film going in, but my expectations were rather low. It quickly became apparent that this film had no focus whatsoever and just copied and pasted every cliché moment from other rom-coms. It tries to be self-aware but does nothing to stand out from other similar titles (Friends with Benefits and No Strings Attached come to mind)

The biggest missed opportunity here is that it completely wastes the talent of Emma Roberts. Her character of Sloane is unlikeable throughout the film. It became even more frustrating as the movie went along because I know she is deserving of better parts. This is a romantic comedy and she doesn't even come close to showing the comedic chops that she showed in We're the Millers, for example. Her character is just the traditional rom-com lead, and she doesn't deserve to get typecast in these roles. I want to see her play fun characters like she's done before in Scream 4 and Nerve.
The male lead here is also an issue for me. Luke Bracey is fine as Jackson, for the most part. However, similar to other rom-coms, he's just the typical ladies man who begins to fall for the lead actress. I truly believe they wanted to cast one of the Hemsworth brothers for this movie and couldn't afford them so they got a discounted version instead. He’s fine, I just kept thinking of him as the 3rd Hemsworth brother instead of his character. 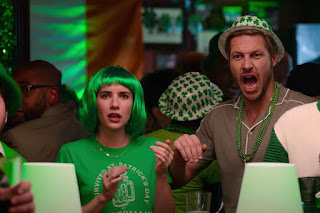 The writing might be the biggest problem with the movie. It is all over the place in tone and structure. It takes so much from other films in this genre, and as a result it isn’t different enough to be remembered. Tiffany Paulsen has only written 4 films (including this one), so she doesn’t exactly have a proven track record. I hope that she can find her voice to help her movies become be unique. The same thing could be said about the director as well. John Whitesell hasn't exactly lit the world on fire with his direction. The one thing I will say is that Holidate fits well in his filmography. He somehow gets pretty decent talent on-screen, but he gets very little out of it. 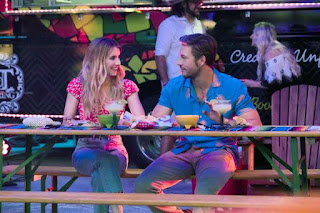 Overall, I would strongly recommend you all to skip this film. It's a weird mash-up of tropes that thinks it’s being clever when the audience is smart enough to see through it. It is filled with unfunny gags and cringey characters that take away from any possible enjoyment one might have. I don't think it's the worst movie or movie experience of the year, but it's definitely in the conversation! We can only hope that this film will be forgotten in a few weeks and we can move on with our lives. It is being released two days before Halloween, but there are more scenes around Christmas time. This seems to indicate that even the studio had no idea what to do with it.